Chelsea were the victors from the clash with Manchester United in the quarter finals of the FA Cup on Monday night. 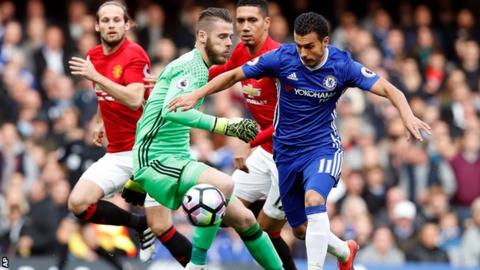 United played without their star striker Zlatan Ibrahimovic – who is serving a three-game suspension for his display in the draw against Bournemouth. Marcus Rashford was the star for the night but N’Golo Kante scored the goal that sent Chelsea to the next stage against Tottenham.

Managers Jose Mourinho and Antonio Conte were at each other’s neck during the game, with the fourth official in the middle. Mourinho was angered that the players of the opposition were falling to the ground too easily. The fans of the club he used to coach were against him on the night. When Paul Pogba and Eden Hazard clashed, the Belgian star fell to the ground, the fans slammed Mourinho as he protested.

David De Gea was excellent on the night to deny Chelsea goalscoring chances. He stopped Hazard’s attempt early in the game even with the ball coming off Matteo Damian. Real Madrid, who would be able to compete in the transfer market from this season, would surely have been impressed with the display. He could not stop Kante’s effort.

Kante himself was impressive during the game. He bullied even bigger players of United to show his superior quality. No doubt, Ander Herrera’s dismissal affected Pogba, but the French record signing could have delivered more.

It seems all is clear for Chelsea to do a double this season. They are set to lift the Premier League but Conte could equal Carlo Ancelotti’s record come May. Ancelotti did a double in his first year – the League and FA Cup.

The result also compounds Mourinho and United woes this season. While the Portuguese tactician may no longer be ‘the Special One,’ it seems United might end the term with just their EFL Cup. They are still in the race for the Europa League – an interesting one, as victory would assure them a Champions League spot after their disappointing run in the Premier League.